After a couple of false starts, we were on our way to the Pura Luhur Uluwatu. The sunsets at Pura Luhur are supposed to be some of the most beautiful in Uluwatu. A place known for beautiful sunsets. The Balinese fire dance taking place, framed by an incredible sunset, was meant to be one of the best things to see in Bali. After a couple of dull and cloudy days (as well as more exciting ones), we were finally granted a bit of sun. We grabbed an Uber from our Airbnb (13000IDR – less than £1) and were dropped off in the car park.

We went up to the ticket office and bought our tickets (50000IDR per person – about £3), we then turned to see a large wooden box full of fabrics of purple, green and orange. In the temple, your legs are supposed to be covered. Laura, in preparation, had worn a long skirt, but I had no intention of wearing trousers for the entire afternoon and into the evening. Any excuse to wear a skirt.

I picked up a slice of the most resplendent purple polyester that one could wish for, and tied the whole thing together (literally) with an orange sash. We walked into the grounds of the temple, which between the cool sea breeze and the light shade thrown by the trees provided a lovely temperate introduction to Pura Luhur. 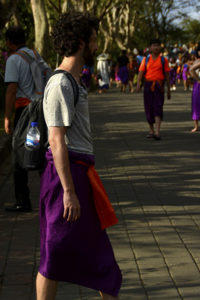 The trees brought with them another benefit – there were an abundance of monkeys in the area. We’d previously seen macaques in Borneo, where they were winding up their larger brethren – Proboscis monkeys, but hadn’t seen much of an opportunity to meet them up close and personal.

We wandered a little more around the grounds of the temple, taking in some astonishing views over the sharp cliff faces, the sound of distant, enormous waves crashing into the base of the cliff. We spent a long time walking down the cliff path as it was utterly heaving with tourists stopping and starting, taking selfies, and entirely holding up all foot traffic to get family portraits. After what felt like an age, we managed to get onto a wider path and the traffic eased up. For a while we watched the waves crashing against the cliff below – which after many years has formed an undercut that is considered evidence of the temple’s divine connections, in that it hasn’t yet fallen into the sea –  then set upon a path leading back to the main temple that was filled with monkeys.

The monkeys are a sacred animal in Bali, due to their revered status in the Hindu religion. Much like any overindulged child, they’re terribly behaved. There are attendants who stand there and warn visitors of the imminent theft of their property, but the monkeys are very fast and we saw a number of people lose pairs of glasses to the nimble fingered simians.

Before we’d witnessed this, whilst walking back towards the temple, we were taking a video (and clasping my phone tightly in the process) of a monkey. Whilst Laura was distracted, one of the attendants said to us in a firm voice “Bottle. Bottle. Bottle!” A moment later a sneaky monkey, taking advantage in our lack of focus, yanked on the bottle of water in her hand. She held on, not knowing what the protocol was and if the monkey should really be running around with a half empty bottle of water. The monkey then bared its teeth and the matter was decided. It scampered off with the bottle and we walked on, glad to have learned the lesson with a 12p bottle of water rather than a £500 phone. 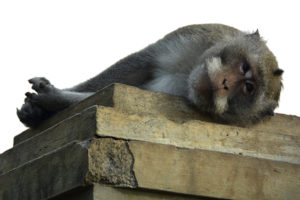 Some were pretty chill though

We walked on climbed the stairs to the temple. The temple itself was older and of a different style to many other temples that we’d seen, and the best view of it was actually from the cliffs opposite. 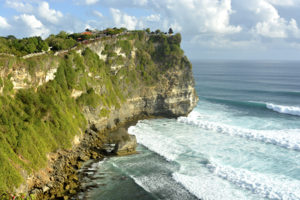 This is my better side…

More impressive was the Kumbakarna statue that stood at the bottom of the steps to the temple. Standing a few metres in height, it’s face contorted in rage directed at the monkeys it was grasping, it was spectacular.

The detail was incredible

We followed the opposite cliff, which gave more awe inspiring sea views, before heading back to our favourite spot on the opposite cliff, hoping to watch the sun set from there. This turned out to be the right place to be, as the ticket office had just opened for the Kecak dance. We paid the admission fee of 100,000IDR – about £6 each – and were handed a sheet explaining the story that we were about to watch before joining the queue to enter the outdoor auditorium to watch the dance.

It was packed by the time we got in there, and finding a couple of adjoining seats was easier said than done. Even after we were seated, they still managed to pile a couple of hundred more people into the large circular theatre.

After a brief introduction, the show was on. The auditorium fell silent as the crowd waited in anticipation of the fire dance. Then we heard it, a persistent ke-chak-ke-chak-ke-chak sound making its way toward us. The source of the sound than revealed itself as the choir walked through the gate and into the centre of the stage. They sat down, continuing their chant – which is where the Kecak dance gets its name – for several minutes as the audience watched the hypnotic display with rapt attention as the choir changed the pitch and flow of the sounds, with a steady undertone of ke-chak-ke-chak. 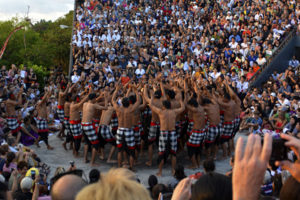 The all-male choir singing and dancing

The actors then came onto the stage in ludicrously ornate garb. Depicting a section of the Hindu epic poem, the Ramayana, they danced around to the Kecak chants and the choir actually moved around, using their arms to portray objects such as trees in a forest. The show also featured the monkey God Hanuman, who is revered in both Hinduism and Buddhism as a figurehead of devotion, cunning and strength, as well as just being an all around good guy. Hanuman was portrayed as a playful character, first revealing himself to the audience by climbing up into the higher stands and ruffling children’s hair, stealing hats and even taking selfies with audience members. This drew a lot of laughs from the audience, the slapstick humour translating very well to the assembled masses from many different countries and continents.

The show culminated in Hanuman escaping from the enemies citadel, which included a fire dance. This pretty much involved some bundles of sticks being lit on stage and being kicked out the the actor portraying Hanuman, which was a little different to what we expected, but was good fun anyway.

Fire in a crowded theatre. What could go wrong?

I shan’t try to condense and synopsise a section of a 24,000 verse epic that is held dearly by two religions, but the story was fun and the characters were – as previously mentioned – beautifully outfitted. It was definitely a fun way to spend an evening with a sizeable amount of other tourists. We headed back to Single Fin – a fairly typical Western-style bar for dinner, glad to have taken in what seems like a fairly significant part of Balinese culture.